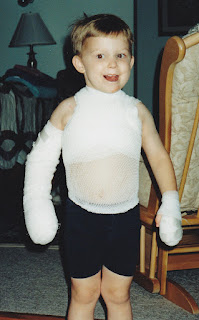 When my eldest was a mere three years old, he suffered a horrible burn thanks to a bowl of grits.  My DH was microwaving some (poor guy, he never got them unless he made them because I do NOT love them), the microwave went off, he was on the phone with me, trying to give me directions to a co-worker's mother's funeral, and my dear little boy opened the microwave door (which he had never done before), reached in for the bowl of grits and proceeded to pour them down the front of his body.  As you can imagine, it was not good.  He burnt his hand, chin, part of his upper arm and a big spot on his chest.  I got out of the funeral, got the call and rushed home and together we took him to the ER.  Not fun and I do not recommend the ER unless absolutely necessary!  Long story short, he suffered mostly 1st and 2nd degree burns and was sent home all wrapped in gauze with a tube of Silvadene Cream.

At this point in my life, I was beginning to dabble in natural medicine.  I didn't like the looks of the Silvadene and didn't want to keep it bandaged in a moist environment.  I just didn't see how it would heal well that way.  I resorted to my beloved copy of Herbs for Health and Healing, to see what Ms. Kathi Keville had to say about treating this burn.  I used her recipe for Aloe Burn Spray, producing results that shocked the doctors and healed my son.  The recipe calls for aloe vera juice, lavender and vitamin E.  I made some slight changes, using what I had on hand.  I did not cover the burns (we were at home and had no plans to go out, at this point) but instead let them be exposed to the fresh air.  I wrapped them in gauze when we left the house to protect the burns.  I took him to the doctor, a mere one day later, and I thought the doctor was going to fall on the floor.  He was in shock.  He ran around the practice, gathering people to come look at how amazingly fast my son's burn was healing.  I'm not joking.  A week and a half later, most of the scabs were gone and a nice pink layer of skin coated the burn sites.  An added plus, we were told that he would carry a scar there for the rest of his life and that if he got sun, the area would stay white.  Neither of those has proven true.  8 years later, you can't even tell where the burn was.

Now obviously, I am not recommending that you refrain from seeking medical attention.  Ms. Candee, in her book, Gental Healing for Baby and Child, gives some good advice on when to seek emergency help.  There are some burns that would just be too painful or dangerous to handle on your own.  Even if you seek medical treatment initially, you can follow with natural treatment, as we did.  Check out my recipes page for the Burn Remedy. 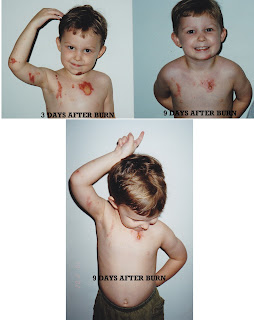 Posted by EarthMama at 8:48 PM

This is a God sent! I ahve recently undergone laser treatment for thr removal of tattoos...I have been concerned about the toxicity of the process, as I am now a naturalist! Needless to say, two of the treatment areas healed just fine, but the largest one, developed a bulla, and after 14 days is still causeing me much pain! The bulla has released the fluid, but silvadene and constant bandage was reccomended and it seems to have gotten worse! It is not drying! I am headed to gather s few items to add to the previous lavender I was using to make this spray! Thanks! P.S. I found you by accident as I follow Farmama...a farm family also!! :) you are on my favorites now!

I'm so glad our experience (and experimentation) is helping someone else. I just recently used this on sunburns my little ones got under their eyes after a day at the water park and the next morning they weren't even pink! (I had applied a natural sunscreen but I guess not enough!) I really hope it helps with your wound healing! Please let me know if you have success with it and thanks for your kind comments!

What recipe did you use??

If you look under "Pages", there is a subheading "My Recipes". You'll find the burn recipe there.