A year without Dad...


One year ago today, I lost my dad.  He was killed tragically in a freak car accident.  He was 60 years old and healthy as an ox.  It was the first time in my life that I had lost someone in such a shocking, unexpected way.  My grandmother had died 3 years before from cancer and I was actually there when she died, but she was sick before and we had time to adjust to the fact that she wasn't going to make it.  There was no warning, no preparation with dad.  He was here one minute and gone the next.

My dad was often described as being bigger than life.  Over 1,000 people tied in by phone or attended his funeral and he had impacted every single one of their lives.  He was generous and kind.  He was the king of the catch phrase and he had a nickname for everyone, at least if he liked you.  He always brought me fruit in the summer, his favorite being strawberries for strawberry shortcake.  In the winter, it was pilau (pronounced per-low), a rice dish with chicken, sausage and bacon.  He loved it with soy sauce.

Have you ever heard that song by Tracy Lawrence called "Find Out Who Your Friends Are"? (video)
That song describes my dad to a tee!  I can't begin to tell you the number of times he jumped in his truck to go rescue someone on the side of the road or to help someone get into their car after locking their keys inside.  He was the guy to call because people knew that he would not hesitate to help out.  He also volunteered much time in helping people learn about the Bible and on building projects like the Orangeburg Assembly Hall.  He was the Food Overseer and was known far and wide for the fun and laughter he brought to anything he was involved in.

I miss my dad.  I firmly believe in the Bible's promise that the dead will live again, right here on this earth, and that death will be no more. (John 5:28,29; Revelation 21:3,4)   I do.  That's what keeps me going.  But it still hurts.  I still think about all that he is missing now.  9 grandkids, 6 of which he saw almost daily, are growing a little each day and he is missing it.  His "favorite", as in only, grandson grew 6 inches in the past year.  He's starting to become a man and Papaw is missing it!  He would be so proud of all of them.

There were so many times in the past year when I wished I could have just one minute with my dad.  Or a DeLorean.  Wasn't that what the car in "Back to the Future" was called?  If I could just go back and tell him not to take that road.  If only someone had distracted him for 5 minutes or not distracted him.  Any little variance in the events of that day and my dad would be here.  It is truly as the Bible says, "Time and unforeseen occurrence befall us all." (Ecclesiastes 9:11)  We definitely did not foresee this happening.  Quite frankly, on the road is the last way I would have envisioned losing my dad.  He was a professional driver.  He had even driven straight through to California from the east coast at one point.  He'd been hauling trailers since he was a teenager working on the carnival.  That he would die in a car accident, unfathomable.  Yet, it happened and we can't go back, we can't have a minute and we can't change anything that happened that day.

I have lived in a bubble the past year.  I did okay at first.  I think the shock kind of envelops and protects you for a while.  Then I just lost interest in life.  Not in living, I wasn't suicidal or anything.  I just didn't care whether I was part of my life or not.  It was easier to bury my head in a book and read about other people's lives than to live my own.  I guess that is a form of depression.  I wasn't sad or crying all the time.  I just didn't have any motivation to do anything.  Couple this with serious health problems and it just leads to a lot of time in bed and a messy house!  My husband was quite patient through it all though he had his moments.  My kids were really a big help, more than they know.  And my mom, she has been the glue that has held us all together.  She, who lost her husband of 39 years.  I know she's had it worst of all but she keeps moving forward, keeps busy and keeps focused on the Bible's hope for the future.

Anyways, I'm back.  We had our district convention this past weekend.  It was another milestone in a year of milestones.  First convention without dad with the 1 year anniversary of his death just 4 days later.  The convention was so upbuilding though and the drama Friday was our life this past year.  It really helped me to refocus and I came back feeling like a weight I didn't even know I'd been carrying had been lifted off my shoulders.

One year.  It took me a whole year to get here.  I'm sure to have days now and again but I feel like I've turned a corner.  With the continued support of my family and lots of prayer, things will only continue to get better.  We'll be giving Dad/Papaw hugs and kisses before we know it!  We'll look back at these dark days and be happy that we made it through to enjoy the wonderful blessings Jehovah had in store for us! 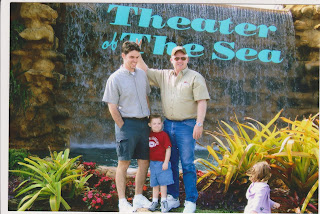 If you would like to learn more about the Bible's hope for the dead, click here: www.jw.org

Very beautiful babe! I'm sitting in my truck crying like a baby.

I didn't realize how much I needed Dad until he was gone. It was nice to know he was there if I needed help with anything. I've been feeling overwhelmed thinking that it's just me with all these women to take care of.

I'm not alone though, are Father Jehovah is there to help. So we can turn the corner together and rely more on him even more.
I Love you very much!

What beautiful words about your dad and the journey to a year later. I do understand your pain and delight in the fact that we share the same hope for the future and know we will be seeing our dads again soon. Love you.

Great words girl, I hope you feel better from here on! I think you have done great this past year. You are so fortunate to have such a wonderful FAMILY.I hope to get to see you in Sept. when the boys come up to go camping. I'm sure you girls can find something fun to do. Remember you are loved & please continue to rely on Jehovah! By the way, I am free to act as a fill in dad if needed (I qualify in two ways: I'm old enough & I love you). Jerry & Rita

What beautiful things to have the privilege of saying about your dad. So hard to believe it's already been a year. I know he would be so proud of you guys, and the way you've handled such tragedy. The day he wakes up and sees you all there will be truly memorable. The drama this year at the convention truly was your life over the last year, it's so wonderful to know that Jehovah knows you need time to deal with setbacks, and everyone handles them in different ways and at different time speeds. You are a strong person Candy, and I really admire you for the example you set for your children, your nieces and other family members not to mention your congregation and other who know what you've been through over the last year. I pray for you guys regularly and am so thankful that I can call you and Mike by brother and sister :)
Much Love,
Lydia

Very well said Candy. I have great memories of your family and especially your dad. He was a one of a kind special person. I can't wait to welcome him back with you.

I was going along and truly enjoying your cukinary/natural cure expertise when my heart was pulled in I an unexpected way by the story of your Dad, and my friend. He must have liked me too, cause he had a dozen ways to say my name lol....I laughed every time because I would still be walking to where I was going as he increased his volume on the last few phrases while I could still hear :) ..he always made me feel welcome, you got that from him. There's so many things you do just like him. You can keep his memory alive until we see him again...tell us as many stories as you can remember. Your blog is awesome. I'm eager to learn some things that will benefit me and my family. XOXO

Thanks, Starla! I'm happy to tell Dad stories and to be a reminder of him. He had a way of making people feel loved, and if I can do that even just a little, I'm a happy camper. I'll try to posts lots of useful stuff!