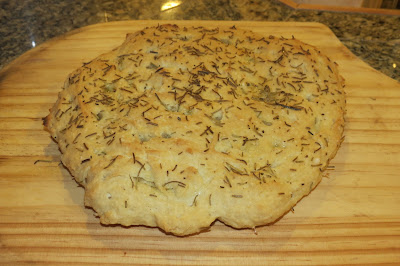 My passion for bread baking began when I stumbled across a recipe adapted from Jim Lahey's no-knead bread recipe.  I read Jim's book and tried out some of his recipes and I was sold!  I loved this no-knead thing.  I wanted a way of making up more than one batch at a time and eventually picked up a copy of Artisan Bread in 5 Minutes a Day.  Here you made up large batches and stored them away for up to 2 weeks!  The only problem was that ABin5 used way more yeast (2 T per 6 cups flour vs. 1/4 t per 3 cups flour in Jim's recipe).  So I decided to combine the two techniques.  I would mix up a large batch using only 1 teaspoon of yeast, let it sit out out for 12 hours and then refrigerate.  It would be Healthy Bread in 5 Minutes that would lead me to gluten-free baking.  I had friends with Celiac so I tried out the gluten-free recipes on them.  Of course, I immediately began adapting them so I would have gluten and gluten-free versions of the bread I was offering for sale at the co-op.

The focaccia above comes courtesy of HBin5's Gluten-Free Olive Oil Bread recipe.  I mixed up a batch last night and made 3 baguettes.  I had maybe 1/2 pound left over so we put it in the fridge.  I got it out tonight, flattened it out on a piece of parchment then sprinkled it with course salt and rosemary, let it rest for 30 minutes or so then popped it in a 450 degree oven for 30 minutes.  My kids could not believe it was gluten-free.  The only variation from the recipe was I used 1/2 cup of olive oil and used half tapioca, half Expandex where it called for tapioca starch.

Be sure to check out http://www.artisanbreadinfive.com for more tasty gluten-free recipes or read the book Healthy Bread in Five Minutes a Day by Jeff Hertzberg and Zoe Francois.
Posted by EarthMama at 7:59 AM